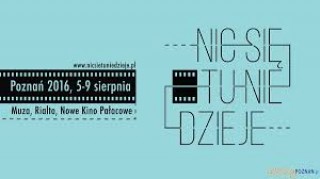 Joe Toy, on the verge of adolescence, finds himself increasingly frustrated by his single father, Frank's attempts to manage his life. Declaring his freedom once and for all, he escapes to a clearing in the woods with his best friend, Patrick, and a strange kid named Biaggio. He announces that they are going to build a house there, free from responsibility and parents. Once their makeshift abode is finished, the three young men find themselves masters of their own destiny, alone in the woods.

Shy 14-year-old Duncan goes on summer vacation with his mother, her overbearing boyfriend, and her boyfriend's daughter. Having a rough time fitting in, Duncan finds an unexpected friend in Owen, manager of the Water Wizz water park.

23.00
Relax in the Kino Rialto courtyard.

Sexually adventurous Cristina and her friend Vicky, who is bright but cautious, holiday in Barcelona where they meet the celebrated and wholly seductive painter, Juan Antonio. Vicky is not about to dive into a sexual adventure being committed to her forthcoming marriage. But Cristina is immediately captivated by Juan Antonio's free spirit and his romantic allure is enhanced when she hears the delicious details of his divorce from fellow artist, the tempestuous Maria Elena.

A couple goes on a cross-country road trip from North Carolina to Los Angeles. Along the way they visit filming locations for some of their favorite movies while they fall in and out of love.

Denmark, 1970. Erik, a professor in architecture, inherits from his father an old large house in Hellerup, in the north of Copenhagen. Together with his wife Anna, a known newsreader on television, he takes up residence there. The boredom that occurred in their marriage is to go against, they decide to invite a few friends in the large house to live. As after for a while live a dozen women, men and children in the housing together. They live in a commune where everything is decided collectively. The balance that is so, threatens to be disturbed when Erik falls in love with his student Emma and the young woman also comes to live with them. Freja, the fourteen-year-old daughter of Erik and Anna observes the community and look for its own way with the events to go.

The story of Florence Foster Jenkins, a New York heiress who dreamed of becoming an opera singer, despite having a terrible singing voice. The film is based on the true story of the New York socialite Florence Foster Jenkins. In 1944 she hired Carnegie Hall to perform as a soprano soloist. With no musical ability whatsoever but a large inheritance to enable her to indulge her love of performing, Florence Foster Jenkins becomes an unwitting musical clown which sustains the comedy throughout the film. The character is played with gentle comic affection by Meryl Streep.

Explorer Professor Challenger is taking quite a beating in the London press thanks to his claim that living dinosaurs exist in the far reaches of the Amazon. Newspaper reporter Edward Malone learns that this claim originates from a diary given to him by fellow explorer Maple White's daughter, Paula. Malone's paper funds an expedition to rescue Maple White, who has been marooned at the top of a high plateau. Joined by renowned hunter John Roxton, and others, the group goes to South America, where they do indeed find a plateau inhabited by pre-historic creatures, one of which they even manage to bring back to London with them

An English mother and teenage son spend a week in the South of France breaking up a summer home that has become one of the casualties of the boy's parents' crumbling marriage. Matters only become more complicated when an enigmatic local boy enters their lives.

A warm tale about family relationships. A bitter-sweet story of two sisters who have to join forces despite their mutual dislike when faced with a difficult life situation. Marta is successful. She’s a renowned actress, a star of popular series. In spite of her fame and money she still can’t find her way in life. She raised her now already grown up daughter on her own. In contrast to her strong and dominating elder sister, Kasia is sensitive and has a tendency towards exaltation. She works as a teacher. Her marriage is far from perfect, her husband is a loser constantly trying to find a job. There’s no great love between the sisters but their mother’s sudden illness forces them to act together. They have to take care of their beloved but despotic father. Marta and Kasia gradually become closer to each other and regain their lost relationship, which gives rise to a series of tragicomic situations.

Early summer. In a village in northern Turkey, Lale and her four sisters are walking home from school, playing innocently with some boys. The immorality of their play sets off a scandal that has unexpected consequences. The family home is progressively transformed into a prison; instruction in homemaking replaces school and marriages start being arranged. The five sisters who share a common passion for freedom, find ways of getting around the constraints imposed on them.

Tracy, a lonely college freshman in New York, is rescued from her solitude by her soon-to-be stepsister Brooke, an adventurous gal about town who entangles her in alluringly mad schemes. Mistress America is a comedy about dream-chasing, score-settling, makeshift families, and cat-stealing.

Banksy is a graffiti artist with a global reputation whose work can be seen on walls from post-hurricane New Orleans to the separation barrier on the Palestinian West Bank. He fiercely guards his anonymity to avoid prosecution. An eccentric French shop keeper turned documentary maker attempts to locate and befriend Banksy, only to have the artist turn the camera back on its owner. Includes footage of Banksy, Shepard Fairey, Invader and many of the world's most infamous graffiti artists at work, on walls and in interview. As Banksy describes it, "It's basically the story of how one man set out to film the un-filmable. And failed."