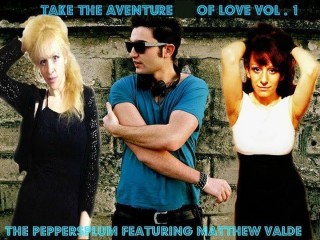 The Peppersplum return with new and amazing studio albums the 3º and 4º in their discography.

New Single Take the adventure of love is out now

After the great reviews that gained their second studio album “IS IT LOVE?”  This album was nominated for IMAS awards of México, and for UFI awards in Spain, The Peppersplum start to record what will be their 3º y 4º studio album will be called FAST LOVE VOLUMEN 1 y FAST LOVE VOLUMEN 2 where they retake the sound of the 70s and electronic music to capture their essence. It's not about covers, it’s to resume sounds, pick the style, because they are the composers of all their songs and now with the merger of the Italinan Dj Matthew Valde his style Techno Tech House, fits the equation for a very interesting project . 2 sides of the same song, yin and yang, black and white, the side smooth and danceable in the Dance of FAST LOVE VOLUME 1, and the dark side and tormented of rock in the FAST LOVE VOLUME 2. Something that nobody had done it before, the same composer, play and experience with the 2 sides of the same artwork, two answers the same feeling.

The first single called TAKE THE ADVENTURE OF LOVE, and in Spanish TOMA TODO MI AMOR is now in promotion. Both in Rock version and Dance version the two sides of a coin is now available in ITUNES y SPOTIFY

They're known for its perfect blend of rock, pop, music, lyrics and feelings that this arises.

It is their first foray into dance music and they not disappointed, as the sound they bring is fresh, as a composers they do not stay in one musical style, they explore their creative world, which led to this album of dance music, and evolves in their compositions, expanding the spectrum which prevents to classify them in only one format, because not only stay in their comfort zone, but they explore and venture into different sounds, which only enriches them as authors.

The album as always is mixed by the winner of a Latin Grammy with Cafe Tacuba the audio engineer Ricardo Arteaga, the rock part is with the producer who always accompanies them, Gerardo Australia who is a great musician, his last job was for the English series Down town abbey which has a wide audience. And taking part in the Dance the italian Matthew Valde who is an experimented dj in electronic music around all Europe.

Rock band born in England in 2006 performing in local pubs, they are Mexican, which adds importance to have started in another country. Influences The Beatles and U2. Emerging as the mixture of character and the need to display and communicate musically. Members  Marie and Sussie, are sisters, composers, interpreters of their songs. They have been in important venues at Mexico such as Pasagüero and club 88, been invited as well to the first fair of wine and cheese in Mexico City, which was hold in the House of Culture Jesus Reyes Heroles. In 2016 they participated Commemorating the month of the history of women, invited by the music committee of the US Embassy and the Benjamin Franklin library in Mexico, as part of their tour ROLLING THE CITY. They will be in the Mexico City Metro in August in Line3 and Linea9, and September Line3. Soon be confirmed, more dates.

They have two CDs for sale the first entitled "YEAH!" 2008 debut album that came out in the first compositions of the members.

Their second album “IS IT LOVE?” 2010 this CD has been very well received by the press and the media in general, being among the 40 best in the festival Coventry England.

With reviews as the one by BeatleBabe star journalist from Midland radio in Englad. -"What an interesting group.  These two sisters from London/Mexico produce this sort of Euro-pop against brass and guitars that are very Beatle-esque. After awhile though, the vocal style of the songs wears thin with me and I keep visualising the Cheeky Girls."-Beatlebabe

In the United States some local radios have mentioned them among the top 100 albums of the year.

Brazilian journalist Lais Soares Eiras, in the YONOHABLOSULINGA website mentions them as THE MEXICAN DIVAS.

And in Argentina the PEPPERSPLUM are cataloged as geniuses by the rock era presenters, Flavia Labad and Sebastian Barsi.

2016 are given recognition "Mexico in your hands" for the enlargement of Mexico through its music.

REALIZE/ HAVENT FOUND YOU/ WHATS ON YOUR MIND?/ LUNA AZUL.

Tracklist de IS IT LOVE? :

About the mix and production of their studio albums:

mixed by the winner of a Latin Grammy with Cafe Tacuba by 5.1 the audio engineer Ricardo Arteaga, brings his great sense to mix, while production is by Gerardo Australia who is a great musician, his last job was for the English series Down town abbey which has a wide audience